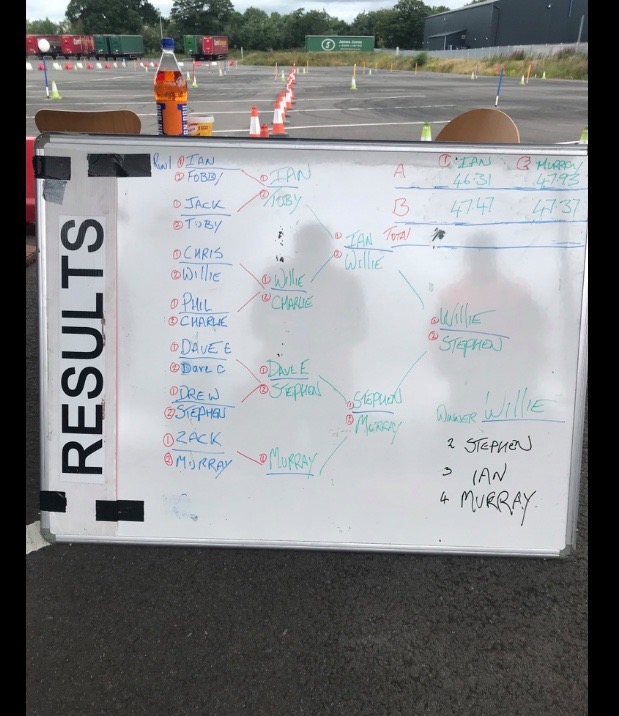 Sunday was a great day weather held no rain although it did threaten for the afternoon , 5 runs at tests A & B set up as tandem tests completed by 12 and a deserved and popular winner Mr Paul Fobister

The draw for the afternoon event was done during the mornings driver briefing and some may say there were some finals run early on , our mornings winner obviously peaked and was knocked out in the first round “Fobby ” this was almost as popular an occasion as when he won the mornings event !!
Ian triumphant in his elimination of the King , waited to see who his next target was going to be ?

Jack and Toby Front wheel drive head to head , very close but Toby for the win with a missed gear from Jack

Willie and Chris next up as a 1st round final , Willie having tried most of the rear wheel drive entries had finally settled in Stephens Striker , unfortunately for Chris, Willie takes it until I am corrected I am sure this was decided by single cone penalty !

Phil and Charlie , Phil not looking forward to this but piloted the MX5 well but ultimately the road going MX5 was to big a handicap on these tests, Charlie progresses

On to the veterans run Dave Cook had secured a by to the second round but Kevin withdrawing meant Dave Evans needed some company ! once we got them shuffled up to the line some old dog skills were apparent but Dave now getting to grips with the striker secured the win

Drew and Stephen , Drew has been enjoying the morning runs and approached these runs the same smiling all the way round and enjoying every second! Stephen Progresses

Zack and Murray winner takes a by to the third round so all to play for , Nothing in it till the return direction and we can see Murray Pulling out a slender lead repeats on the B run and knocks Zack out , now has a we rest till round 3 !

Now every one has had a run and the tension rises no one had predicted the excitement or the pressure for driver and spectator the crowd not calling for one or the other but chasing both drivers on this is what I love about this sport and you all. Well most of you ! You know who you are ! Who doesn’t like Irn Bru how rude !!

Round 2
Ian getting in his stride and determined not to be beaten by FWD pulls a commanding lead from Toby and is gracious in his success
WIllie still in (Stephens Striker) shows no compassion during a strong run at A&B forcing colleague Charlie out who piloted Zacks car excellently
Dave and Stephen this could go either way and I wasn’t looking forward to having to count with my crayons to sort this one out both stunning drives spectacular to watch both drivers across the tandem tests. Stephen Wins
Murray still having a Nap waiting for his call up having secured a by to the 3rd round

Round 3
Ian and Willie – old dog versus young upstart tension rising, gear boxes straining, and there off, tyres squealing two runs later Willie Clinches the win and secures a place in the Final,
Stephen and Murray – not to be biased here but I was hoping for a good show from the FWD ship of Murray and boy did he nearly deliver !!! a finish line cone for Murray gave the win to Stephen without which we nearly had a Scottish Final , without the penalty Murray took Stephen by 0 .2 of a second fantastic runs.

Final
We now have the problem that Willie has borrowed the car from his companion in the final Stephen, 2 choices we run individual timed tests and fastest wins or Willie drives another car , after a mad rush of cars getting strapped to trailers , you know I am not lying when I say Ian was still talking to some one and his car was still on the tar !!!
Ian kindly offered up the Riot for Willie to use because the spectacle of tandem test has gripped everyone and they want to see a tandem final

Cars Cooled, drivers slapped, time keepers ready they are off , nothing in it both drivers focused and pushing hard and then a cone !! no one has recovered from 5 sec penalty but the pressure of the final meant nothing was certain , Willie I know was wanting no distraction and just to get on with the second run having a 5 second advantage with Stephen hitting the cone meant nothing with still one run to go , nothing said quiet whispers and a hush in the control centre.
Second run everyone I mean everyone was as focused as Stephen and Willie watching for a levelling mistake or a missed gear but nothing , both having clean runs handed WIllie the win , probably the most satisfying and dare I say important win of the season, I am not sure but that was a great spectacle and what a buzz !!!

Again I thank you all for coming to our weekend and look forward to seeing you next year!! ?